Whew. These past couple weeks have been crazy busy it feels like. I think I’ve had something to do every single day almost…which might not sound bad to a normal person but I need my don’t leave the house other than to go to the gym and get kids to and from school time. Ive only been to the gym twice in the last 2 weeks. TWICE. I think. Maybe once? I did do a couple out of the gym workouts thankfully but still not near enough.

It’s all about the kids this week it seems. Not a bad thing. They’re kind of awesome. 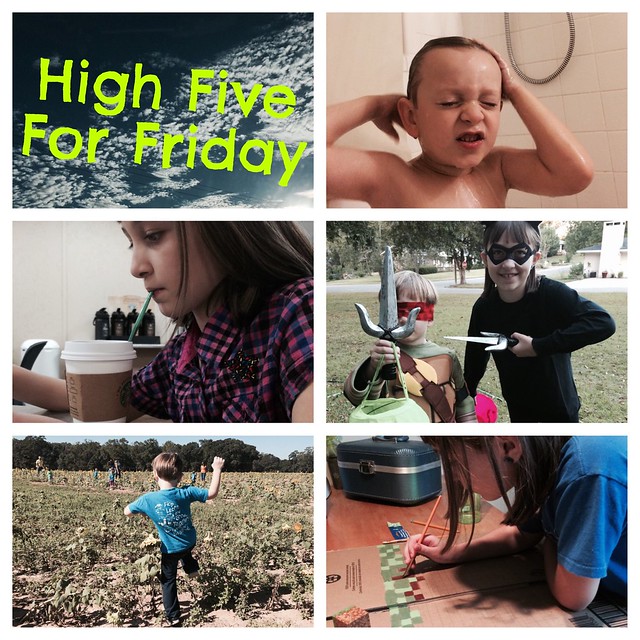 1. Timmy take showers now more than baths and he’s good at washing the soap out of his own hair. Really I just lather him up and he does the rest. And how freakin cute are the faces he makes while rinsing?? Love.

2. Not really a high at all…but yeah. L’s throat hurt off and on all weekend. Monday it was really bad so I took her in to the Dr and turns out she has strep. NOT a high. But we did spend 2 long hours at Lyster together walking laps around the building and drinking some Starbucks while we waited. I liked having the alone time with her even under the cruddy circumstances.

3. Happy! After a day on meds she was good to go to her school’s fall festival. It’s kind of a big deal. They dressed up and played games, got candy, and bounced in bounce houses. I was a twitchy mess because there were 900 people there but they had fun, looked cute, and L won an amazing peanut butter cake (that Im trying not to finish off) in a cake walk.

4. Wednesday we were back to Aplin Farms with Timmy’s school. We got to do the whole tractor ride and everything this time around which was fun for him. I just loved seeing him with the two girl friends of his that he talks about all. the. time. They’re adorable.

5. While Layla was at school yesterday I hit up the Walmarts for some paint so we could work on her costume. She’s being an Enderman from Minecraft. Google it if you want to know more because I honestly don’t know much other than its back with long arms and apparently carries around grass blocks? I dunno. But she wants a grass block instead of a regular trick or treat bucket. So I make all the little squares and when she got home we started painting them. We followed the pattern on a plastic Minecraft toy block she has.

It’s been a pretty good week even though it was busy. Some things that are also awesome but didn’t make the top 5:

– I went to both derby practices this week. I missed Thursday last week so it was good to be back again. And there were a lot of new girls! Yay new girls!

– I got my mouth stitches out so I can actually use a straw now with the dr’s permission. Yay straws!

That’s all for this week. Bring on a lazier next week!

I’m once again linking up with Lauren Elizabeth :)

2 thoughts on “High Five for Friday!”